Ah, spring break with my sweet, little monkeys.  Imagine us sleeping in each morning, lounging around, quietly water-coloring, and peacefully reading our favorite books in the backyard under a spring sun while just-right temperatures make it warm enough to hang outside in only a sweatshirt and jeans.

Now, let me bring you back to reality.  My 7 year-old had a nightmare (thank you to one of my still-favorite kids for sharing a terrifying urban legend about a killer who strikes while the parents are out and have left the children with a babysitter – you know the tale), which brought her to my bedside at 2 a.m.  Did I mention I was up until 1 a.m., writing because I’m basically unable to turn my frustrating brain off long enough to realize how tired I am?  Of course, I couldn’t just send her back to bed, because she was sobbing about the deranged killer in her closet waiting to dismembered the sweet, young babysitter in her dream.  So I laid in her bed, rubbing her back until she drifted back to sleep.

I wish I hadn’t noticed the clock said 2:58 a.m. when I finally crawled under my blankets because then maybe it wouldn’t have felt so painful when my toddler appeared beside me desperately whispering “Mommy” as she pulled on my arm at 5 minutes after 4.  I decided it would be faster to just put her in bed with us, so I swooped her up and tucked her in between her daddy and I.  By then, I was so tired, I barely noticed her elbow wedge into my ribcage or the alligator death role she executed as she tried to get comfortable.  I could have slept in the jaws of a real alligator by that time.

Before 7 a.m., I could hear my oldest scavenging through the kitchen as he helped himself to breakfast.  Our first Monday of spring break started like every other day, much too early for a woman who had battled a serial killer and an alligator the night before.

The little zombie attacked, but the big kids were ready barricaded in the corner of the room behind pillows with an airsoft M-16 (bullet-free) and a Nerf riffle.

The part that was gloriously different is that I didn’t have to rush my kiddos out the door and wave goodbye as they traipsed away to school.  I could keep them!  I could drink ridiculous (and likely unhealthy) amounts of coffee as they ran through the house giggling in their pajamas until nearly noon.  It was nice not to be rushed, and it was hysterical to watch them play.  The things they come up with  (with no encouragement from me) are the memories I hope I can keep in my brain long after I’ve lost my ability to drive my own car and skip down the hallway without the aid of a walker (seriously, if I’m using a walker when I’m 90, you know I’m totally gonna figure out a way to skip with that baby – I’ll also need to figure out how to run with it, so I can hide quickly after placing the whoopee-cushion under the seat of one of my unsuspecting fellow nursing home residents).

The best part of the first day of spring break was watching my kids play zombie.  The big kids, along with our little friend Annie, armed with various toy weapons, hid behind a barricade of pillows and blankets while my youngest crawled like the living-dead across the room toward them, growling and rolling her eyes back into her head.  It was hideous and adorable at the same time.  The mommy inside of me felt a little bad to watch Logan and Ella shooting their little sister, but Brielle was playing the role of the flesh-eating zombie, so I suppose a little weaponry was justifiable.  And she was kinda scary, dragging her limp, little lower-half behind her as she scurried across the floor growling like a rabid ‘coon intent on consuming her sibling’s flesh.  So they  defended themselves with Nerf and bullet-free airsoft guns. 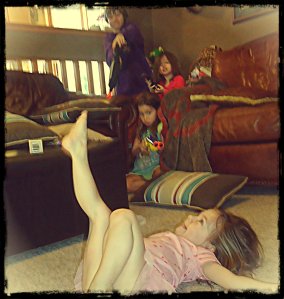 The zombie was successfully stopped, and she performed a very graceful and dramatic zombie death scene.

I justify this display of violent play-acting by telling myself that they’re just preparing to perform in Logan’s short movie he’s been diligently locking himself in his room to write – as I mentioned in a previous post, it happens to be a zombie movie, and I can already see that my youngest might have a starring role as a flesh-eating, living-dead child.

I’ll admit, it’s not your typical game of hide-and-seek, but it’s a very creative version of a perfectly normal childhood pastime, and I’m totally gonna pretend that all kids play zombie with their brothers and sisters.  Besides, you should see the teamwork among the living children as they work together to kill the zombie.  I mean, usually my oldest kids bicker, but when their baby sister is slithering toward them to consume the flesh off their bodies, they are a team.  And Brielle plays an impressive little living-dead baby.  So it’s all good.

2 thoughts on “Attack of the Mini-Zombie”