I have been wanting a tattoo since I was 18 (which is actually about half my life – yikes – that makes a girl feel slightly old).  So in celebration of my 29th birthday (okay, if you did the math from the first sentence, you know I’m a little older than 29 (okay, okay…I was celebrating my 37th birthday, but I refuse to look a day over 29 until I hit 40, and then I’ll let my fake-age go up to 30)) – anyway, in celebration of my birthday, I FINALLY got a tattoo!

I’ve actually been with several of my friends while they’ve gone under the gun.  I’ve even selected a butterfly or two that I thought would look super-awesome on my ankle, but each time, my friends talked me out of getting one.

“You’re WAY too much of a perfectionist!  You’ll get it, like it for a year, and then wish you didn’t have it!”

I knew they were right.  The truth is, if I had gotten a butterfly tattooed on my ankle (or anywhere else on my body), I would absolutely wish I didn’t have it now.  Not because butterflies aren’t beautiful, but because they really don’t have any significant meaning to me (other than they’re cute).  And now that I’m older, I consider a tattoo a pretty awesome opportunity to portray a message without saying anything at all.

I’ve had half my lifetime to marinade on this, and I keep coming back to the same three words.  “Do good anyway.”  Those words pretty well sum up the way I want to live my life; the way I want to raise my children to live; the way I wish we’d all try to live.  They come from a verse originally written by Kent M. Keith entitled “The Paradoxical Commandments”.  The original version says this, “The good you do today will be forgotten tomorrow.  Do good anyway.”

The verse was later adopted by Mother Teresa and rewritten to more clearly reflect her faith.  But the meaning remains the same.  You don’t do good for accolades or recognition.  You simply do good because you want to bless others.

So the day after my 29th (37th) birthday, I went to Jerome James  (JJ) at The Canvas Tattoo Studio.  He came recommended by my friends and one of my younger brothers.  JJ is an amazing artist!  He’s been featured in tattoo magazines around the world, and after flipping through a few of his books while I waited for my appointment, I felt sort of sad I didn’t want a more elaborate tat!  Having him ink three words on my foot seemed like a waste of his mad-skills.

I’m not gonna lie.  Getting a tattoo on your foot hurts.  Period.  There were moments when it just felt like an annoying prickle, but mostly it felt like JJ was slicing into my flesh with a razor blade.  But it went super-fast, and within a matter of a few minutes, it was done.

I might be gripping the arm rests on the chair in this picture cause it sorta-totally hurt. 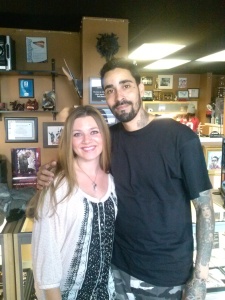 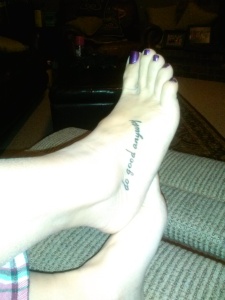 And here’s the verse I took the phrase from…as rewritten by Mother Teresa.  I could probably riddle my body with quotes from this.  I love EVERY singe line!

People are often unreasonable, irrational, and self-centered.  Forgive them anyway.

If you are kind, people may accuse you of selfish, ulterior motives.  Be kind anyway.

If you are successful, you will win some unfaithful friends and some genuine enemies.  Succeed anyway.

What you spend years creating, others could destroy overnight.  Create anyway.

If you find serenity and happiness, some may be jealous.  Be happy anyway.

The good you do today, will often be forgotten.  Do good anyway.

Give the best you have, and it will never be enough.  Give your best anyway.

4 thoughts on “Do Good Anyway”