As I research haunted locations within driving distance of my home, I’m discovering that the Twin Cities Metro has a rich history of documented haunts.  One well noted location is the The Historic Mounds Theater located in St. Paul.   Luckily for me, a friend of a friend, Tristin, happens to work at the theater, and actually leads paranormal investigations there.  So when Tristin asked if I’d like to come on one of the tours, I said, “Heck yeah!” and sent out a Facebook message to see if anyone wanted to come along.  My friend Brenda’s response was much like my own.  So last Thursday, I picked up my fellow stay-at-home mother of three, and off we went on a late night paranormal adventure!

Because we didn’t get any full-body apperitions, you might hear me refer to orbs because…umm…that’s all I’ve got to show ya’, and this recap would be pretty boring if I don’t include a few pictures!  Some of the evidence captured during previous investigations can be seen at the Real Haunted Tours website – these photos and EVPs are a bit more compelling than my “orb” photographs.

My brave friend Brenda and I standing in front of one of the original projectors in the entry of the Mounds Theater.  Our first picture of the night, and look…an orb!

When we first arrive, we had to sign some waivers – basically saying if we injured ourselves or suffered fear induced heart attacks, the theater was not liable.  Then Tristin gave us a quick tour and the low down on the resident ghosts.  First we heard about Jim and Red, both long-time employees of the Theater who loved the place so much in life that they have returned after death to keep an eye on things.  Jim seems to like to maintain order, while Red is a bit of a pranster who has a thing for blondes.  Unfortunately, I had darkened my hair that morning, so any trace of my blonde roots were gone.  The other resident ghost is Mary, a six-year-old girl who was found strangled to death in the parking lot beside the theater roughly six decades ago.  Her murder remains unsolved.  Her spirit has been known to roll balls, turn off flashlights, and has even been photographed peeking behind a stool on the stage.

During our pre-investigation tour, Tristin introduced us to a zombie who hangs out in the balcony storage area.  Of course, I had to have my picture taken with him.  Sadly, this was the scariest photo I have to show you.

I make friends wherever I go!

Be sure to note those military-style boots in the above photo.  Those are my oldest daughters idea of the perfect boots for ghost hunting.  I think she’s on to something.  I’m pretty sure I heard a ghost wimper, “That chick could totally kick my butt!”  Yeah, ghosts are scared of me.

An aparition has been photographed in this corner of the stage. I’m guessing these specs are just dust caught in my flash, but let’s imagine the ghost of Jim is trying to materialize…that’s way more fun than dust!

After our initial tour of the theater, Tristin turned out the lights.  With small flashlights and an EMF detector, we began our investigation.  We started in the basement, where some pretty creepy voices have been capture on audio and unexplained orbs of light have been reported.  So we sat in the darkness with three other brave ladies who came to investigate the theater that night (I’m talkin’ the can’t-see-your-hand-in-front-of-your-face kind of darkness) , requesting that the spirits do something so we’d know they were there.  At one point, the other people on the tour said they saw a strange light beside my chair, and when we turned on our flashlights to try to find an explainable source, we noticed a set of footprints on a chair directly beside us that we hadn’t noticed before.  I can’t say for certain that they weren’t there before the lights went out, but it was kind of fun to think for a minute that maybe Jim or Red was standing there quietly watching as we hung out in the black basement. 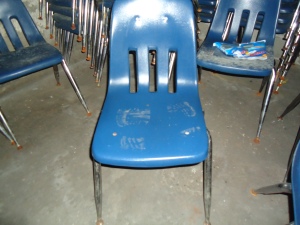 Paranormal or just a dirty chair? Probably option “B” – but the fiction writer in me loves the possibilities that slither through my mind as I imagine option “A”.

After spending a few moments in the pitch blackness of the basement listening to condensation dripping in the old coal chute, we headed back upstairs.  We spent a lot of time sitting on the stage, watching the balcony in the back of the theater (where Red has been reported to hang out).  This is where we saw and heard the most activity that evening.  Unfortunately, my camera was not designed to capture spirits in dark rooms – my attempt to photograph what we saw was a total fail.  But as we watched a shadow figure move in the darkness and heard responses to our requests for it to make noise we all agreed, something or someone was moving around the balcony.

A photo from the stage. It’s hard to see the balcony which ran the length of the back wall. Even before the lights went off, it was difficult to get a good shot because it was so dark in the theater (which tells me I need a better camera for my investigations).

We assumed that this figure was Red and were pretty excited to hear responses to our calls for him to tap on something.  When Tristin asked the entity to “make that noise again”  the blonde in our group and I were offered up as a reward if he complied with our request.  Red must have liked that idea because he tapped good and loud.  So up we went!  In the dark!!  Just the two of us!!!  To stand in the spot we’d just watched a dark figure moving around tapping on things!!!!

I’m not sure I could have braved the journey without my butt-kickin’ boots, but I was feeling pretty brave with those bad boys on.  As I stood in the spot where I had just seen the tall shadow figure, my only request was “Please don’t pick up the zombie and move it toward us because I will poop my pants!”  Hey, nobody (dead or alive) wants to wittness that!  While the two of us stood on the balcony, we heard another knock from the corner just a few feet away from us.  I hollered down to the crew sitting on the stage, “Did you guys hear that?”  They replied “yes” and asked which direction it came from.  When I answered, they informed me that they were just talking about a shadow figure moving around in that exact spot.  I’m not sure why that knowledge didn’t send me running down the stairs.  Instead I invited Red to tap my shoulder or pinch my butt.  I’m afraid my previous threat to soil my britches might have inspired the entitity to keep his distance because there were no ghostly goosings – which was a total bummer!

Below are two orb photos I thought were worth sharing.  These are interesting to me because there is a single, very bright orb in each shot.  I will say again that I don’t put a lot of stock in photos of orbs, but it was all I happened to capture on film this time.

So, do I think the Mounds Theater is haunted?  Based on witnessing the shadow figure milling about in the balcony and responding to our requests for noise, I would say yes.  I’m a little sad I didn’t get more evidence to show you, but check out the Real Hauted Tours website – they’ve got some good evidence on there!  And while you’re at it, book your own paranaromal investigation of the theater – that is, if you’re brave enough!  I double dog dare ya’!